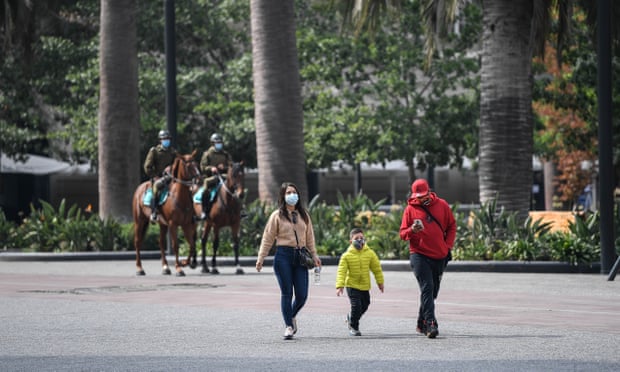 Despite mounting the world’s fastest per-capita Covid-19 vaccination campaign, Chile has been forced to announce strict new lockdowns as it plunges deeper into a severe second wave of cases which is stretching intensive care capacity.

Chile trails only Israel and the UAE in vaccine doses per 100 inhabitants worldwide, but new cases have risen quickly amid mixed health messaging, travel over the southern hemisphere summer holidays and the circulation of new variants.

Nearly half of the South American country’s population has received at least one vaccine dose, but on Friday, Chile recorded 7,626 new cases over a 24-hour period – the highest total at any point during the pandemic – and it is now approaching 1m cases in total.

More than 80% of the country’s 19 million inhabitants, including all residents of the capital, Santiago, have been put under a strict lockdown that prevents them leaving the house even to buy groceries or pharmacy supplies this weekend. During the week, each person is allowed two short-term permits to leave the house to buy essentials and can exercise outdoors between 7am and 8.30am. Only 169 intensive care beds remain available nationwide – an occupancy rate of more than 95%.

Health officials pleaded for people to stay indoors where possible.
“The new variants arriving in Chile are a great worry, and we effectively have one pandemic on top of another now,” said Dr Ximena Aguilera, an epidemiologist who sits on the government’s Covid-19 advisory committee.

“Unlike before, we are seeing serious cases among younger people too, and there is a sense that some people had become complacent towards the end of the summer with the vaccinations going so well.”

A total of 22,587 people have died in the country having contracted the virus, and both the British and Brazilian strains of the virus have been detected in Chile. Its cumulative death rate relative to population remains far below that of Brazil, Mexico, Peru, Colombia and Argentina.

Chile began its successful inoculation campaign with frontline health workers on 24 December, and aims to have 80% of the country’s inhabitants vaccinated by 30 June.

More than 6 million people have received at least one dose of either the Chinese Sinovac or US Pfizer-BioNTech vaccine, and 3.2 million have had both jabs.

Chile continues to outstrip other countries in the region: its rate of 49.19 vaccination doses per 100 people is well above Brazil’s 7.79, its closest competitor. In early March, the Chilean government was even able to donate 20,000 doses of the Sinovac vaccine to Ecuador and Paraguay.

Uptake of the vaccine has been good among older Chileans, who are accustomed to extensive winter flu campaigns enabled by a strong public health network. Everyone aged 50 and above will be able to receive a first dose by 10 April.

“The issue with communication is that it hasn’t been consistent across government,” explained Aguilera. “While the health ministry has repeatedly called on people to look after themselves, the economy minister has been opening casinos, gyms and cinemas.”

Others have pointed to holiday permits issued by the government which allowed movement between areas of the country over the summer.

Santiago’s metropolitan region is home to almost 40% of Chile’s population and is the only one of its 16 regions not to have a coastline. In much of the city people are crammed into small apartments with limited access to green areas and leisure space, and Aguilera’s committee was emphatic in recommending that people be let out of the cities over the summer, as long as precautions were taken.

However, with international travel still allowed, many Chileans took advantage of cheap flights to Miami, Brazil, the Dominican Republic and other destinations, causing the government to tighten restrictions for returning travellers – but not until after the summer holiday season was over.
Everyone who enters the country from 31 March will now have to stay in a hotel for five days at their own expense, before completing five more days of quarantine elsewhere.

“I’m confident that the vaccines will ease the caseload once enough of the population has had their jabs, but any positive effect in terms of reducing hospitalisations and serious cases in older people is unlikely to be seen before mid-April,” said Aguilera.